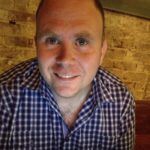 Joe Ksander grew up in Silicon Valley, where his obsession with monsters and spaceships steered him into a career in visual effects and animation. He’s worked for Electronic Arts, Rhythm & Hues, Focus Features, Valve Software, Nickelodeon, Industrial Light & Magic and Walt Disney Imagineering. He has animated for movies like The Chronicles of Narnia, Pacific Rim and Transformers: Age of Extinction and directed animation for 9, Yogi Bear and X-Men: First Class. He also animated the full-scale Na’vi Shaman figure for Pandora: The World of Avatar at Disney’s Animal Kingdom.
Together with his partner Kevin Adams, Joe created the sci-fi short film GEAR, the Teenage Mutant Ninja Turtles short We Strike Hard for Nickelodeon Animation, and wrote and directed the feature film Next Gen for Netflix. Kevin and Joe are currently writing and directing the feature film adaptation of the Aspen Comic Fathom for Mythos Studios.

lease Subscribe to get regular updates about upcoming events

You have Successfully Subscribed!